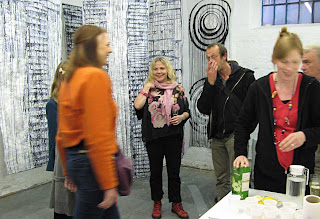 Everything is a blur of activity at Ping! - the latest exhibition at the Keep.  Behind visitors at the opening event is Julia Rogers's latest work: Untitled created from tracing paper, ink, acrylic and silver leaf.  Ping! presented work by studio artists at OpenHand OpenSpace, and also showcased pieces by current OHOS  volunteer Exhibitions Intern Daniel Clements. Conducted tours of  studios on the upper floors were also a well-attended part of this West Berkshire and North Hampshire Open Studios event.
Posted by arttrumpet at 01:50 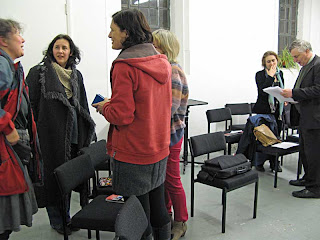 The discussion continued well beyond the end of Roxana Tohaneanu-Shields's lively and provocative talk on Definitions of Art on 2 May.  Roxi gathered together a plethora of ideas from the fields of  aesthetics, philosophy, fine art and art history.  She is currently workiing on a PhD in Aesthetics at University of Reading.  This was the last talk in the current Artspeak series at OHOS, but watch this space for details of the next series, which will appear soon.
Posted by arttrumpet at 01:22

Life Force: The Corn Exchange, Newbury.  1 May - 14 June 2012
This exhibition, curated by Jane Vaidya, presents work inspired by the 2012 Olympics.  It includes OHOS artist Ingrid Jensen's photographs of her sculpture Poker Dice.  This was originally made for arjeea21's Olympic Ideals exhibition in Battle Library Reading in 2009 in response to the Olympic and Paralympic Values: Excellence, Respect, Friendship, Equality, Determination, Courage and Inspiration.  The five plaster forms are derived from knuckle bones, and may rest in any one of six positions.  No matter how high our ideals, our future is still vulnerable to chance - a throw of the dice.
The exhibition is part of Open Studios West Berkshire and North Hampshire.