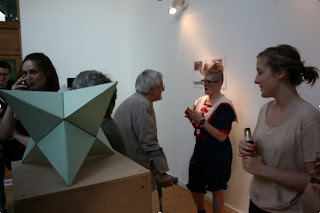 Emily, who lives in Reading,  was awarded residencies at OpenHand OpenSpace in 2007 and 2009, and has now been appointed as an Exhibitions Intern at South Hill Park Arts Centre in Bracknell.  She plans to continue making sculptural work and hopes to complete an MA next year.

In 2007, she and her peers curated the group show ‘20 BELLOWS’ which took place in the Keep.  The show demonstrated a re-thinking of various lo-brow and craft based mediums, such as carving space ships into wood.

In 2009, following her graduation from the Ruskin School, University of Oxford, Emily used her studio and the project space in the Keep to prepare for a group show named ‘FADEINS’ at The Barn in Reading.  This granted her a fairly smooth transition between the private world of the Ruskin to the vast space outside.
Image: Star Sculpture 2009