I visited this exhibition at LInden Hall Studio in Deal with my wife and sister who we stayed with for a couple of days.

Having seen much of the work online, (Twitter, Abcrit, Instagram) and read Robin Greenwoods catalogue essay in advance I was a little bit worried about it. Much of the work seemed messy, with shallow space and little structure.

I knew one of the artists involved but none of the others, apart from what I had seen them write online, and on that basis I expected to be most interested in Patrick Jones and Dean Piacentini. I already had the feeling that Robin Greenwoods selection of artists was essentially from his friends, or artists that he knew, the Brancaster chronicles gang, and that he hadn’t actually looked too widely at what other abstract painters were doing.

So I wasn’t entirely surprised by what I found in the exhibition which I felt I had to see as I call myself an abstract painter. Did this really represent something new and if so was it any good?

I must say though, that it is very good and brave of Linden Hall to put on an exhibition focused entirely on contemporary abstract painting, my hat is off to Myles Corley for commissioning Robin Greenwood to do it. Abstract painting seems to be unfashionable in the art world now. That’s not to say that a lot of artists don’t do it, they certainly do, and much of it is rubbish, but the art establishment is now entirely focused on conceptual art and new figurative painting. Abstract painting is regarded as having had its day; hence I suppose, Robins quest to find something new in it.

“The common uses of those two similar words, “abstract” and “abstraction”, are a complexification. Both can be employed in different ways; but, in the context of painting and sculpture from the recent past, “abstraction” is the commonly used term seen as a characterisation of “simplification”. Such ways of working, especially in the organisation of paintings derived from two-dimensional geometries or compositions indicated by colour variations, have become over-familiar. The development of new abstract painting that is distinctly not related to the past artistic activities of abstracting “from something else” or “from nature” has introduced new excitement in painting. This work is invented wholly from scratch, and in most of the cases shown here, “abstract” often signifies the introduction of more complexity and a degree of original creative movement.”

The catalogue isn’t arranged in the same order as the show, nor is every painting shown in it, which is a shame. On the ground floor the first painting is Patrick Jones “Moonpull”, Oil on canvas, 90x162cm, which I actually found myself disappointed with. It is soft and ethereal, if you like that kind of thing, brightly coloured without any solid form except for small areas round the edges. The edges hold the floating central mass of a grey cloud in place. I enjoyed the surface but found the imagery too soft and woolly. The edges seemed like afterthoughts. I well remember Pat Herons emphasis on edges and recently saw a statement from someone online that “any abstract painter has to understand the importance of edges”. Here I think they’ve become too important; they stand alone seemingly just wedging this amorphous cloud in place.

Next to that things got worse. Hilda Skiltons “Lava Lake”, Oil on canvas, 100x150cm, is an all over arrangement of bright colours thinly and quickly painted. The paint surface is weak, composition is flat, brush handling is weak. It has no structure. I can find no good words for it.

At the back of the downstairs gallery there is a large painting by Robin Greenwood and two smaller collage/paintings by Dean Piacentini. From what I had seen online I expected Robins paintings to be muddy and dark with very little space. This was a little better, it is muddy and dark with very little space but is rescued by the surface quality, which is very matt, dry and crusty; oddly attractive. This one isn’t illustrated in the catalogue which is a shame as it’s the best of his in the show. Myles gave me another catalogue solely on Robin’s work  and the painting is in there, “Untitled 2019” oil on canvas, 177x106cm. Looking through that catalogue I think Robin is probably a better sculptor than painter but I can see the relationship between the two artforms in his hands.

Then Dean Piacentini. I know Dean through his time in Open Hand Open Space studios in Reading and I have seen more of his work, particularly in a solo exhibition he had at Norden Farm Centre for the Arts in Maidenhead and I was able to talk to him then. Deans work has become more complex and is developing fast since he retired from teaching and set up his own studio. These paintings incorporate a lot of collage and colour. The square one has a circular movement and the vertical one a diagonal movement. Both have better pictorial space and depth because of the stronger colour and tonal contrasts but the sense of disorder in them is also striking.

Across the room at the bottom of the stairs we have 3 small collage/paintings by EC (who is that?) The 3-dimensional quality in these is an important and obvious element. I liked them very much. They have the same sense of disorderly all-over-ness combined with real physical depth and complication of imagery. Whether they are abstractions or abstracts I’m not sure and don’t really care. These things either work or they don’t.

Upstairs there is more work and the first one Is “Untitled no5, 2019” acrylic on canvas, 100x162cm by Noela James Bewry. I really enjoyed this. It is again an all over construction and quite flat in the sense that the same brushstroke has been used all over although there is movement of colour. I also noted that she is using a technique of roughly mixing colour so that we get strokes incorporating both elements of the mix which livens up the surface and requires a lot of thought and control. The effect is of quite a shallow space and an all over complexity with plenty of 3D spacial movement. The general feeling between us was that it had a feminine quality and later research confirms that Noela is indeed female. Her two large paintings are by far the best in show.

Harry Hays two paintings were very complex little pieces in terms of imagery and surface and movement of colour within the shallow pictorial plane. 3D space is opened out by contrasting treatment of paint areas. My sister would have taken one home if she could afford it.

Apart from that we have John Pollard, Steven Walker and John Bunker on the top floor.

John Pollards work is dark again with lots of black lining. It doesn’t work for me, I find it messy bad painting.

I see Stephen Walkers drawings and gouaches on Twitter and quite like them. Occasionally he puts up a painting that I almost like. His drawings in particular put me in mind of Auerbach and Kossof but in oil paint it can get messy. I don’t think you can do this kind of work in an urgent rush without some serious planning in one’s head or without waiting for layers to dry, The work here felt overworked and messy.

John Bunker I know is a well-respected artist. I enjoy the open and irregular shapes of his collage, but this work just seemed childish and very poor quality. Disappointing again.

This selection of Robins is marked by the overall-ness of the work, the way it is mostly the same all over the canvas, the shallow pictorial spaces with very little push and pull generated by colour and tonal contrasts, the complexity of the imagery from very busy collages to intense brushwork repeated all over.

So, is this any good? Well yes some of it is and some of it isn’t. Of course these days it’s almost impossible to say what is good and what isn’t. Things so often come down to a matter of taste when there is nothing to measure something by. I like something but you don’t, who’s to say who is right. Perhaps that’s our biggest problem in abstract painting, what do we expect from it to make it good?

Is it new? Much of it actually looks quite old fashioned to me. Certainly all-over-ness isn’t new, Greenberg talked about it all the time and Pollock and others were great exponents of it.

Is collaging in elements new? No, it’s been done since Kurt Schwitters invented Merz and I (and others) have been doing it for years but with more formal structure.

Is working from scratch new? No, I’ve been doing it since 1989 and many did it before me.

The newest and most interesting work for me was by Noela James Bewry, I liked the controlled way she handled the paint and the brush. I can learn from that. 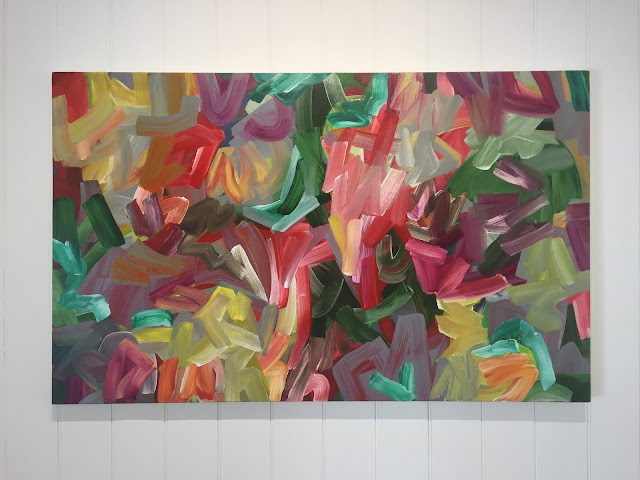 OHOS is an artist-led centre based in Reading that fosters excellence in contemporary art and provides affordable studio and exhibition space for artists. Its education and exhibition program is open to all and promotes public access to visual art and artists. Since its foundation in 1980 in a former military keep, its studios or exhibition spaces have been used by well over 100 artists, including Cornelia Parker and Douglas Gordon. OHOS is an Industrial & Provident Society with charitable status.
Click Instagram for images

Please scroll down to see events and upcoming workshops
arjeea21 meeting every other month on Thursday at OHOS, 7.30pm. £1-2 suggested donation. http://www.arjeea21.com/
All artists welcome to talk about art, bring work for friendly crit: actual work, or digital images on disc or stick for projection.
Future meetings are postponed until further notice.